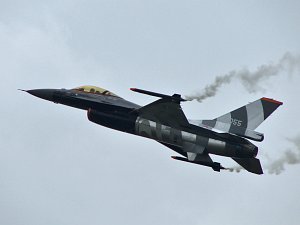 Photo ©: Karsten Palt
The General Dynamics F-16 Fighting Falcon is a single-engine single- or two-seat multi-role jet fighter aircraft produced by the US-American manufacturer General Dynamics Corporation and later by Lockheed Martin Aeronautics Company.
The F-16 was also assembled by Fokker in the Netherlands, by SABCA in Belgium, by Turkish Aerospace Industries in Turkey and by Korean Aerospace Industries in South Korea.