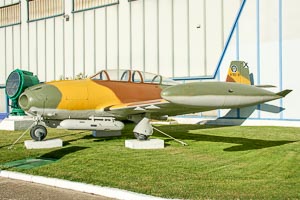 Photo ©: Karsten Palt
The Hispano HA-200 Saeta is a twin-engined two-seat jet trainer aircraft produced by the Spanish manufacturer Hispano Aviación, developed with help of the famous Willy Messerschmitt. The HA-200 was operated by the Spanish Air Force (designation: E.14) and the Egypt Air Force. The HA-220 Saeta is a single-seat ground-attack aircraft variant for the Spanish Air Force (designation: C.10 & A.10).
Helwan of Egypt produced 90 HA-200B, designated Helwan HA-200B Al-Kahira, for the Egypt Air Force under license.
- to top -