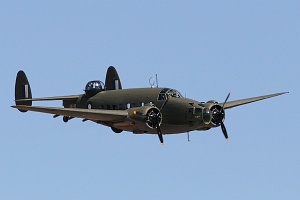 Photo ©: Darren Wilson (Photos at airliners.net)
The Lockheed Hudson is a twin-engined light bomber and reconnaissance aircraft produced by the US-American manufacturer Lockheed Corporation. The Hudson was designated PBO-1 by the US Navy and A-28, A-29 & AT-18 by the United States Army Air Forces (USAAF). The Royal Air Force was the primary user of the Hudson.
The Lockheed Hudson is a development of the Lockheed 14 Super Electra.
- to top -