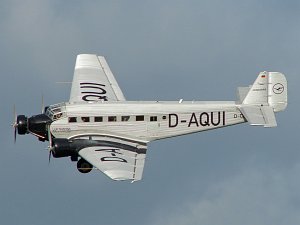 Photo ©: Karsten Palt
The Junkers Ju 52/3m is a three-engine short-range airliner for max. 17 passengers and transport aircraft produced by the German manufacturer Junkers Flugzeugwerk AG, later Junkers Flugzeug- und Motorenwerke AG. The Ju 52/3m was operated by the German Luftwaffe as a troop and cargo transport aircraft, medium bomber and military glider tug aircraft.
The Ju 52/3m is a three-engine development of the single-engine Junkers Ju 52/1m of which only six were built. It could by equipped with floats or skis instead of the wheel landing gear. The Ju 52/3m was produced after World War II in France by Amiot as the AAC.1 Toucan (ca. 415 aircraft) and in Spain by CASA as the CASA 352 (ca. 170 aircraft).