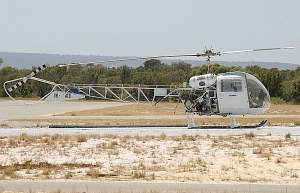 Photo ©: Neville Murphy (Photos at airliners.net)
The Kawasaki KH-4 is a light single-engine four-seat utility helicopter produced by the Japanese manufacturer Kawasaki Heavy Industries.
The Kawasaki KH-4 is a four seat development of the three-seat Bell 47G-3B. The main changes include the enlarged cabin, the new supercharged engine, a new cockpit instrument layout, a modified control system and a larger fuel capacity.
- to top -