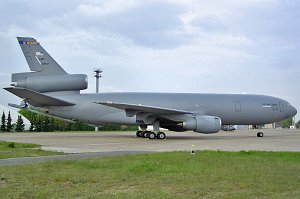 Photo ©: Mike Vallentin
The McDonnell Douglas KC-10 Extender is a three-engined air-to-air tanker and cargo aircraft produced by the American manufacturer McDonnell Douglas in duty with the Air Mobility Command of the United States Air Force.
The McDonnelll Douglas KC-10 Extender is a military variant of the commercial McDonnell Douglas DC-10-30CF Convertible Freighter. The maximum fuel load is 161.508 kg / 356.064 lb. The maximum cargo payload is 77.110 kg / 170.000 lb.
The variant KDC-10 is a converted civil airliner variant developed for the Royal Dutch Air Force (2 aircraft). A total of 4 KDC-10 was produced/converted. 2 aircraft are in operation with civil operators for refueling service.
- to top -