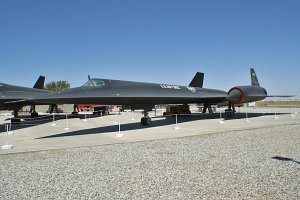 Photo ©: Karsten Palt
The Lockheed A-12 Oxcart is a twin-engined single-seat long-range supersonic strategic reconnaissance aircraft produced by the American manufacturer Lockheed Corporation in operation from 1963 until 1968 by the Central Intelligence Agency (CIA).
The A-12 was designed by the Lockheed Advanced Development Projects Devision better known as Lockheed Skunk Works for the Central Intelligence Agency (CIA). It is the predecessor of the better known SR-71 Blackbird. The total production numbers include one A-12 two-seat trainer aircraft (60-692 called Titanium Goose) and two Lockheed M-21 carrier aircraft to launch the Lockheed D-21 Mach 3+ reconnaissance drone.
- to top -