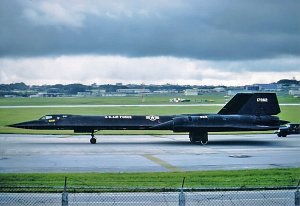 Photo ©: Mike Vallentin
The Lockheed SR-71 Blackbird is a two-seat twin-engined long-range supersonic strategic reconnaissance aircraft produced by the American manufacturer Lockheed Corporation. The SR-71 is capable of flyingat speeds over Mach 3.2 and at a height of 85,000 feet (25.900 Meter).
The SR-71 was in duty from 1964 until 1989 and after a reactivation from 1993 until 1998. It was designed by the Lockheed Advanced Development Projects Devision better known as Lockheed Skunk Works. The SR-71 was in duty with the United States Air Force and the NASA only.
- to top -