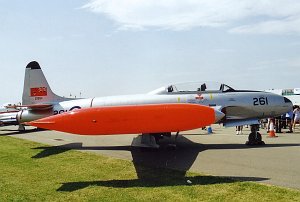 Photo ©: Karsten Palt
The Lockheed T-33 is a single-engine two-seat jet trainer aircraft produced by the US-American manufacturer Lockheed Corporation.
The Lockheed T-33 T-Bird is a two-seat trainer variant of the Lockheed P-80/F-80 Shooting Star, initially designated TF-80C. The T-33 was also licence-built in Canada by Canadair as the CL-30 / CT-133 Silver Star and in Japan by Kawasaki.
- to top -