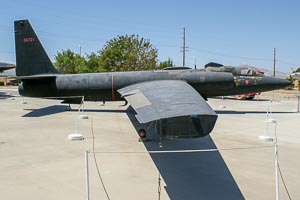 Photo ©: Karsten Palt
The Lockheed U-2 is a single-engine single-seat long-range high-altitude reconnaissance aircraft produced by the US-American manufacturer Lockheed Corporation, operated by the Central Intelligence Agency (CIA), the US Air Force, the Republic of China (Taiwan) Air Force and the NASA.
The U-2 was designed by the Lockheed Advanced Development Projects Devision better known as Lockheed Skunk Works.
- to top -