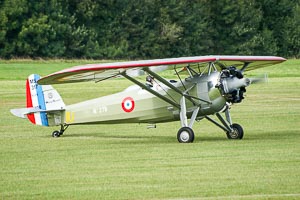 Photo ©: Karsten Palt
The Morane-Saulnier M.S.315 is a single-engine two-seat trainer aircraft produced by the French manufacturer Aéroplanes Morane-Saulnier.
33 M.S.315 were built after WWII. The M.S.317 is a civil glider tug variant converted between 1960 and 1962 (40 aircraft), powered by a Continental W-670K radial engine.
- to top -