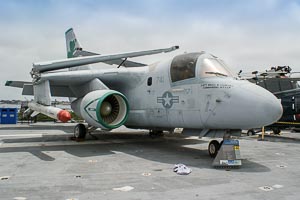 Photo ©: Karsten Palt
The Lockheed S-3 Viking is a twin-engined four-seat carrier-based anti-submarine (ASW) aircraft produced by the US-American manufacturer Lockheed Corporation. The S-3 was developed together with Ling-Temco-Vought (LTV) and Univac Federal Systems. The US Navy was the sole operator of the S-3.
- to top -