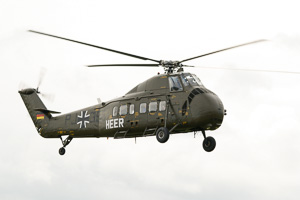 Photo ©: Karsten Palt
The Sikorsky S-58 is a medium single engine multi-purpose transport helicopter built by the American manufacturer Sikorsky Aircraft. The commercial variant of the S-58 has a capacity of 12 passengers. The military variants include the CH-34A (H-34) and CH-34C (H-34B) with the nickname Choctaw. In US Navy Service the variants SH-34G & UH-34J (HSS-1) and SH-34J (HSS-1N) were nicknamed Seabat. The S-58 in duty with the US Marine Corps with the variants UD-34D (HUS-1) and UH-34E (HUS-1A) were nicknamed Seahorse. The first version was the Navy Anti-Submarine Warfare (ASW) variant HSS-1 (later SH-34).
A total of 1868 S-58 were produced by Sikorsky. The military S-58 variants H-34 / CH-34, SH-34 (HSS) and UH-34 (HUS-1) were exported to more than 20 foreign countries. The S-58 was also license built by Sud-Est in France (135 aircraft) and by Westland in England (348 aircraft). Many S-58 helicopters were later retrofitted with Pratt & Whitney Canada PT-6 Twin-Pac Turboshaft engines designated S-58T. Westland developed a variant with 2 Bristol Siddeley Gnome Turboshaft engines under the name Westland Wessex.
- to top -