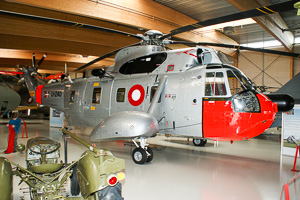 Photo ©: Karsten Palt
The Sikorsky S-61 Sea King is an amphibious twin-engined medium ASW (anti-submarine-warfare) and multi-purpose helicopter produced by the American manufacturer Sikorsky Aircraft.
Variants of the S-61 are the commercial S-61L & S-61N and the S-61R (CH-3C/E Sea King, HH-3E Jolly Green Giant and HH-3F Pelican). The S-61 was also license built in England by Westland with different engines (see under Westland Sea King), in Canada as the CH-124 (United Aircraft of Canada), in Italy (Agusta) as AS-61 and ASH-3 and in Japan (Mitsubishi) as the HSS-2.
- to top -