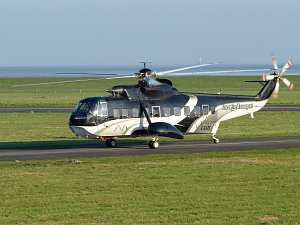 Photo ©: Karsten Palt
The Sikorsky S-61N is an amphibious twin-engined medium transport helicopter for up to 39 passengers produced by the American manufacturer Sikorsky Aircraft.
The S-61N is a development of the military S-61 Sea King helicopter with stretched fuselage. The S-61L is a non-amphibious variant with fixed landing gear. The total production of 116 includes S-61N & S-61L. For improvement of the performance some versions were built with shortened fuselage and different landing gear.
- to top -