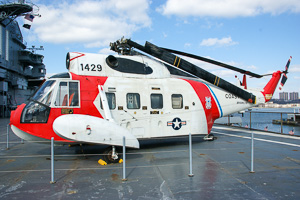 Photo ©: Karsten Palt
The Sikorsky S-62 (HH-52 Seaguard) is an amphibious medium single-engine multi-purpose helicopter produced by the American manufacturer Sikorsky Aircraft. The US Coast Guard was the main operator of the HH-52 Seaguard (S-62C) with a fleet of 99 helicopters. The S-62 can carry up to 12 passengers.
The S-62 was the world?s first amphibian helicopter. It uses the same rotor system like the older piston-engined Sikorsky S-55 helicopter. Sikorsky built a total of 145 S-62. A further 25 S-62J helicopters were built by Mitsubishi Heavy Industries in Japan under a license from Sikorsky.
- to top -