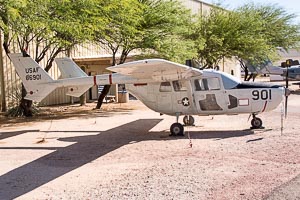 Photo ©: Karsten Palt
The Cessna 336 & 337 Skymaster is a twin-engined six-seat light utility aircraft produced by the US-American manufacturer Cessna Aircraft Company. The US Air Force military variant of the Cessna 337M was designated O-2.
The unusual push-pull engine configuration eliminated asymmetric handling problems (Centre Line Thrust). The fixed landing gear equipped Cessna 336 was in production from 1962 until 1964 with 195 produced aircraft. The Skymaster was also produced by Reims of France including the Reims developed military variant FTB337G Milirole.
- to top -