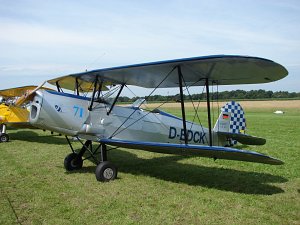 Photo ©: Karsten Palt
The SV.4 is a single-engine two-seat touring and trainer biplane aircraft produced by the Belgian manufacturer Stampe & Vertongen. The Stampe SV.4 was used by the Belgian Air Force and the French Air Force as a trainer aircraft. It is often only called the Stampe.
Only approx.. 35 SV.4 have been built before World War II when the production stopped. The SV.4 has an advantage compared the famous de Havilland D.H.82 Tiger Moth with being equipped with ailerons at both wings which makes it very agile. The Stampe was built after World War II by the successor company Stampe & Renard for the Belgian Air Force. It was also license built in large numbers by SNCAN in France and in Algeria.
- to top -