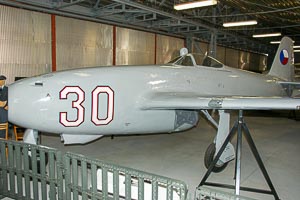 Photo ©: Karsten Palt
The Yakovlev Yak-17 is a single-engine single-seat jet fighter aircraft developed by the Soviet Design Bureau OKB Yakovlev (OKB-115). The two-seat trainer version Yak-17UTI was the main-production variant, it was the first Soviet jet trainer aircraft.
The Yak-17 is a development of the Yakovlev Yak-15 with a tricycle landing gear.
- to top -